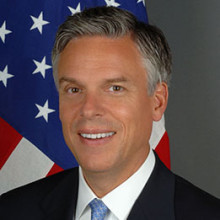 Jon M. Huntsman, Jr. is Chairman of the Atlantic Council Board of Directors.

He began his career in public service as a Staff Assistant to President Ronald Reagan. He has served each of the four US presidents since then in critical roles around the world, including as Ambassador to Singapore, Deputy Assistant Secretary of Commerce for Asia, US Trade Ambassador, and most recently, US Ambassador to China. In all three Senate confirmations, he received unanimous votes. Twice elected Governor of Utah, Huntsman brought about strong economic reforms, tripled the state’s rainy day fund, and helped bring unemployment rates to historic lows. During his tenure, Utah was named the best managed state in America. Recognized by others for his service, Governor Huntsman was elected as Chairman of the Western Governors Association, serving nineteen states throughout the region.

This was a far better result than in his run for the Presidency in 2012, where he ultimately placed third in the New Hampshire primary before bowing out. He currently serves on the boards of Ford Motor Company, Caterpillar Corporation, Chevron Corporation, Huntsman Corporation, the US Naval Academy Foundation, and the University of Pennsylvania. In addition, he serves as a Distinguished fellow at the Brookings Institute, a trustee of the Carnegie Endowment for International Peace, a trustee of the Reagan Presidential Foundation, and Chairman of the Huntsman Cancer Foundation. Governor Huntsman has served as a Visiting Fellow at Harvard’s John F. Kennedy School of Government, as well as a Distinguished Lecturer at Duke University’s Sanford School of Public Policy. He was recently inducted into the American Academy of Diplomacy.

Huntsman is the father of seven children, including two adopted daughters from China and India. His two sons are midshipmen at the US Naval Academy, where his oldest son was selected as a Naval Aviator. Huntsman is a graduate of the University of Pennsylvania and has eight honorary doctoral degrees.