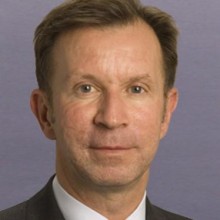 John Studzinski is Vice Chairman, Investor Relations and Business Development and a Senior Managing Director of Blackstone where he holds special responsibility for a number of sovereign and international institutional relationships, as well as ultra high-net-worth families outside the United States.

Mr. Studzinski joined Blackstone in 2006 as Global Head of Blackstone Advisory Partners, which he ran for nearly a decade.

A graduate of Bowdoin College, Mr. Studzinski also has an MBA from the University of Chicago. He joined Morgan Stanley in New York in 1980 and since then has spent much of his career in London, where he served as Head of European Investment Banking and Deputy Chairman of Morgan Stanley International before moving to HSBC in 2003 as a member of the Group Management Board and Co-Head of the Investment Banking Division. In 2007 he was voted Banker of the Year by The Bank of England.

In November 2014, at St. James’s Palace in London, Mr. Studzinski received the Prince of Wales Medal for Arts Philanthropy, which complements the Prince of Wales Ambassador Award that in 2000 recognized his philanthropic work with the homeless. Since 2001 he has been Chairman of the Genesis Foundation, a UK-based charitable foundation he established; through partner programs it enables organizations in the fields of theatre, music and visual arts to nurture the careers of outstanding young artists, developing their talents and giving them access to influential mentors and valuable networks.

In the field of the arts he is also Chairman of Create London, which connects artists with communities through an ambitious project program, and is a driving force of the Tate Foundation, which raises and invests money for the Board of Trustees of the Tate Gallery.

Also Vice Chair of Human Rights Watch and President of the American Friends of The Royal Foundation of The Duke and Duchess of Cambridge and Prince Harry – which focuses on challenges facing young people, members of the armed forces, and conservation – he serves on the boards of directors of a number of organizations, including: in the US, Bowdoin College and the Foundation for Art and Preservation in Embassies; in the UK, The Passage Day Centre, American Patrons of Tate, The Royal Parks Foundation and The Royal College of Art. In addition, he is Chairman of The Benjamin Franklin House Museum in London and a member of The Atlantic Council, The Council on Foreign Relations and The Peterson Institute.

John Studzinski holds the Papal honors of Knight of the Order of St. Gregory and Knight Commander of Saint Sylvester and in 2004 was awarded the Beacon Prize for Philanthropy. In 2008, the Queen’s New Year’s Honours List named him Commander of the British Empire (CBE) for services to the Arts and Charity.