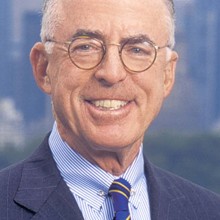 Rosenwald has served and supported many nonprofit organizations, and was named Philanthropist of the Year by the New York Times in 2000.

He is a member of the Board of Trustees of many organizations, including the Environmental Defense Fund; the National Center on Addiction and Substance Abuse at Columbia University; the National Organization on Disability; the National September 11 Memorial & Museum at the World Trade Center; the NYU Langone Medical Center; and the Teachers College at Columbia University. Additionally, Rosenwald is a life trustee for the Central Park Conservancy and New York University, a trustee emeritus for the Metropolitan Museum of Art, executive chair and a current member of the Executive Committee of the fund for the Met.

Rosenwald is a former chairman of the Board for Dartmouth College. Currently, he is a member of the Council on Foreign Relations, Fellow of the American Academy of Arts and Sciences, Century Country Club, Harmonie Club, and the Palm Beach Country Club.