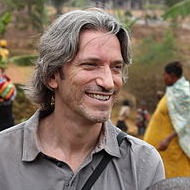 John Prendergast is a human rights activist and New York Times best-selling author who has focused on peace in Africa for over thirty years. He is the Founding Director of the Enough Project, an initiative to end genocide and crimes against humanity. He is also the Co-Founder of The Sentry, a new investigative initiative focused on dismantling the networks financing conflict and atrocities. John has worked for the Clinton White House, the State Department, two members of Congress, the National Intelligence Council, UNICEF, Human Rights Watch, the International Crisis Group, and the U.S. Institute of Peace.  He has been a Big Brother for over 25 years, as well as a youth counselor and a basketball coach.

John is the author or co-author of ten books.  His latest book, Unlikely Brothers, is a dual memoir co-authored with his first little brother in the Big Brother program. His previous two books were co-authored with Don Cheadle: Not On Our Watch, a New York Times bestseller and NAACP non-fiction book of the year, and The Enough Moment: Fighting to End Africa’s Worst Human Rights Crimes. He is also beginning a book project on the Congo, in collaboration with actor Ryan Gosling.

John also serves as Executive Director of Not On Our Watch, the foundation founded by George Clooney, Matt Damon, Don Cheadle, and Brad Pitt.