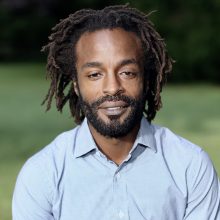 First recognized for his work with multi-platinum hip-hop group The Fugees, John Forté is a Grammy-nominated recording artist, filmmaker, writer and activist.

In 2001, Forté was arrested and convicted for a first-time, non-violent drug offense. He was sentenced to 14 years in a Federal prison. Seven years into his sentence, Forté was granted executive clemency by then-president George W. Bush. Acknowledging this opportunity as a second chance, Forté focused his efforts to criminal justice reform in America. Since returning home in 2008, Forté has also released several solo and collaborative projects including, but not limited to:

Forté worked with Mary’s in early 2017. He created, directed and scored ‘Mary’s Chimes,’ real-life stories from people who improved their lives and health by using Mary’s Medicinals and Mary’s Nutritionals products. Forté was deeply moved by the testimonials and quickly realized the broader implications of living in a world where people were knowledgeable about the benefits of cannabis and cannabis-related products. With a renewed sense of duty and inspiration, Forté accepted the invitation to join the Rose team as Head of Strategic Partnerships in the autumn of 2018.

For the past 25 years, Forté has developed, maintained and nurtured relationships with artists, industry leaders, influencers, and members of the press. His roles and responsibilities at Rose Capital/BR Brands are not only within his skillset, they represent a unique amalgamation of his personal experiences as a creative director, a critical thinker, and a collaborator.