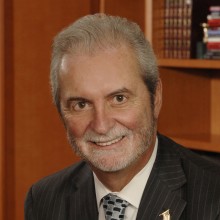 John P. Calamos, Sr. is Chairman and Global CIO of Calamos Investments, a firm he founded in 1977. With origins as an institutional convertible bond manager, the firm has grown into a global asset management firm with major institutional and individual clients around the world. The firm is headquartered in the Chicago metropolitan area with additional offices in London, New York, San Francisco and Miami.

Mr. Calamos has established research and investment processes centered around a team-based approach designed to deliver superior risk-adjusted performance over full market cycles through a range of U.S. and global investment strategies including equity, fixed income, convertible and alternative investments.

With 49 years of industry experience, he is often quoted as an authority on risk-managed investment strategies, markets and the economy. He is a frequent speaker at investment seminars and conferences around the world and appears regularly on CNBC, Bloomberg TV and Fox Business Channel.

He received his B.A. in Economics and an M.B.A. in Finance from the Illinois Institute of Technology. He joined the United States Air Force after graduation where he served as a combat pilot during the Vietnam War and ultimately earned the rank of Major.