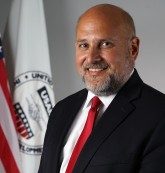 John Barsa is the acting USAID Administrator. Prior to assuming these duties on April 11, 2020, he was sworn in on June 10, 2019, as the Assistant Administrator for USAID’s Bureau for Latin America and the Caribbean. Barsa brings considerable experience from decades of service in the public and private sectors.

Mr. Barsa comes to USAID from the Department of Homeland Security (DHS), where he led the DHS Office of Partnership and Engagement (OPE) as the Acting Assistant Secretary and later as the Principal Deputy Assistant Secretary. In these roles he oversaw DHS’s coordination and collaboration with governors, mayors and other intergovernmental partners, the private sector, the law enforcement community, and other key stakeholders. His leadership was also critical in the successful efforts by OPE’s Blue Campaign in combatting the scourge of human trafficking.

Mr. Barsa began his career at DHS in the Trump Administration as Special Assistant to Secretary John Kelly, a position he took after serving on President Trump’s DHS landing team during the Administration’s transition. During the historic 2017 hurricane season, he deployed to South Florida to assist with Hurricane Irma preparation and response. Later, in the immediate aftermath of Hurricane Maria, he deployed to Puerto Rico where he designed and led one of the most complex and challenging intergovernmental affairs efforts in FEMA history.

John Barsa’s civilian experience in the Executive Branch extends back to the Administration of President George W. Bush, when he was appointed to lead senior level coordination with the private sector and support legislative affairs efforts for the National Aeronautics and Space Administration (NASA). Soon after the creation of the Department of Homeland Security, he was asked to create and lead the DHS Office of Public Liaison. In this role, he successfully coordinated all DHS outreach to key critical stakeholders under the leadership of Secretaries Tom Ridge and Michael Chertoff.

Barsa first entered public service as a member of the U.S. Army Reserves, initially with the 11th Special Forces Group and later with the 450th Civil Affairs Battalion. While still in the Reserves, he started working in the U.S. House of Representatives for Congressman Lincoln Diaz-Balart (R-FL). In this capacity, much of his work focused on defense and other issues related to national security. Part of his portfolio included support for democracy and human rights in Cuba, Nicaragua, and throughout the Western Hemisphere. He also played an active role in the passage of the Nicaraguan Adjustment Central American Relief Act (NACARA), which modified U.S. immigration laws.

In the private sector, he has held key positions with a premier defense trade association, small businesses and large businesses including a leading Fortune 100 company.

The son of a Cuban refugee, Mr. Barsa grew up in a fully bi-lingual and bi-cultural family in Miami, Florida. He has a bachelors degree in International Affairs from Florida International University and is a graduate of Syracuse University’s National Security Management Fellows Program.