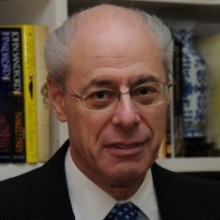 Chair of the Chumir Foundation for Ethics in Leadership

Joel Bell founded and serves as Chair of the Chumir Foundation for Ethics in Leadership, created in memory of his friend and business partner, to stimulate informed discussion of diverse views and to nurture ethical leadership on issues of significance for a fair, productive and harmonious society. He was born in Montreal, lives in Toronto and New York. He was educated in economics and law at McGill University and did post-graduate studies in business, economics and law at Harvard University.

Mr. Bell has been involved in business in Canada, United States and Europe. Most recently involved in the European mining sector, he earlier founded and served as President and CEO of the Maxlink Group of Companies (a telecommunications venture in Canada); was Executive Chairman of Power DirecTV (a satellite to home TV service in Canada); served as President of a real estate development in Paris; and worked as a business development and financial advisor and executive in natural resources, financial intermediation services, manufacturing and broadcasting.

Mr. Bell was founding President and Chief Executive Officer of Canada Development Investment Corporation (CDIC), a holding company for a number of diverse equity holdings of the Government with a mandate to turn around financial and business distress situations, strategically direct and operate the businesses and lead their privatization. Together they had annual sales of over $15 Billion and some 90,000 employees. He was co-founder of Petro Canada, a fully integrated oil and gas company, and was part of the management that built the company from its inception to one with over $5 Billion in assets and $1 Billion in annual cash flow.

He was Senior Economic Advisor to Prime Minister Pierre Elliot Trudeau for a number of years and held a variety of positions with the Government of Canada, including: Special Advisor to the Department of Energy, Mines and Resources; Special Counsel to the Canadian Radio-Television Telecommunications Commission; Chairman of the Working Group on Foreign Investment; Special Advisor to the Minister of Consumer and Corporate Affairs; Staff Consultant to the Canada Department of Labour; Consultant to the Economic Council of Canada; and Research Officer with the Prime Ministerial Task Force on Labour Relations.

Mr. Bell has served as a consultant to the Government of Indonesia on employment stimulation and as Counsel and Director of Research to the Royal Commission on Labour Legislation in Newfoundland and Labrador. He has served as an arbitrator and mediator of labour-management disputes in the United States and practiced law in Montreal. He is the author of several articles and reports.

He has served on a number of business Boards and as Chairman of the Council for Canadian-American Relations and Director of the Canada-France Business Council. He has also served on the Boards of the Calgary Philharmonic, National Ballet of Canada, Tennis Canada, Montreal International Film Festival and Toronto Arts Awards.