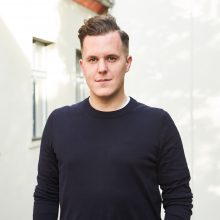 Jochen is the Co-Founder & Managing Director of Cosmonauts & Kings. He has always been enthusiastic about the impact of digitalization on politics and democracy since he joined the Berlin start-up ecosystem in 2007.

During his master degree in professional public decision making at the University of Bremen, he became a consultant for the Swiss publishing house Ringier in Africa to develop an expansion and investment strategy for digital ventures in sub-Saharan Africa. In 2014 he joined DCM in Berlin as the portfolio and investment manager for seed- and early stage start-up investments. The portfolio included investments like delivery hero or seerene.

After nearly 10 years of academic and professional experiences at the intersection of politics and digitalization, Jochen co-founded Cosmonauts & Kings together with Juri Schnöller in 2016. The first political tech start-up in Germany to enable the usage of technology and data as political capital for cititzens and political actors.