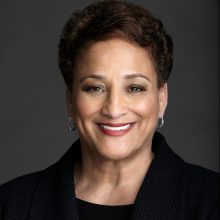 As CEO of AARP, Jo Ann Jenkins leads the world’s largest non-profit, nonpartisan membership organization, harnessing the power and passion of almost 2,300 staff members, 60,000 volunteers and numerous strategic partners. Since joining the organization in 2010 and heading it since 2014, she has transformed AARP into a leader in social change, dedicated to empowering people to choose how they live and age. A fearless champion for innovation and impact, Jenkins is often lauded for her ability to create business opportunity and competitive differentiation. She has been described as a visionary and global thought leader, a catalyst for breakthrough results, accelerating progress and contribution while fostering positive relationships. While AARP has long been recognized for its services, information and advocacy on behalf of people age 50 and over, Jenkins led efforts to redefine AARP’s vision, challenge outdated beliefs and spark new insights that allow people to adapt to the new realities of aging – with relevant solutions to everyday issues such as health, financial resilience, digital and social connectivity, work opportunities and personal fulfillment. Under her leadership, AARP has been recognized as one of the World’s Most Ethical Companies. Her best-selling book, Disrupt Aging: A Bold New Path to Living Your Best Life at Every Age, has become a signature rallying cry for revolutionizing society’s views on aging by driving a new social consciousness and sparking innovative solutions for all generations. She also established a new strategic direction and operating structure for AARP Foundation, focusing on change in four critical areas – hunger, income, housing, and isolation. She created Drive to End Hunger, a multi-year, nationwide campaign which has donated tens of millions of meals and provides support to over 100 anti-hunger organizations across the country. Jo Ann began her career with the U.S. Department of Housing and Urban Development, moving on to progressively more responsible leadership positions in the U.S. Department of Transportation and U.S. Department of Agriculture before serving as Chief Operating Officer of the Library of Congress where, among other things, she led eleven National Book Festivals. Jo Ann Jenkins holds a variety of board and advisory positions including AARP Board of Directors; General Mills Board of Directors, The Wall Street Journal CEO Council, Kennedy Center National Symphony Orchestra Board of Directors, Stanford School of Medicine Board of Fellows, AVNET Board of Directors; World Economic Forum Stewardship Board for the Education, Gender, and Work System Initiative; World Economic Forum, Board of Governors for the Health Systems Initiative; Vice-Chair, International Oversight Board, National Academy of Medicine’s “Healthy Longevity” initiative. In 2019, she received the Baldridge Leadership Award, and was named by Fortune as “One of the World’s 50 Greatest Leaders”. She has been recognized with BlackDctor.org “Top Blacks in Healthcare” award (2019); Diversity & Flexibility Alliance Luminary Award (2019); WNET New York Public Media 2018 “Woman of Vision” Award; Washington Business Journal’s “Women Who Mean Business” award (2018); Black Enterprise Magazine “Most Powerful Women in Business” (2017); Actor’s Fund Medal of Honor (2017); International Association of Gerontology and Geriatrics 2017 Presidential Award; Foreign Policy Global Thinker (2017); Power 100 – Washington’s Most Influential People, Washington Life Magazine (2015-2017); “Non-Profit Influencer of the Year” (2015); “Non-Profit Times’ Power and Influence Top 50” (2013-2019); Peace Corps Director’s Award (2014) and Malcolm Baldrige Fellow (2013). After earning her Bachelor of Science degree from Spring Hill College in Mobile, AL, she graduated from the Stanford Graduate School of Business Executive Program. Jenkins also holds an Honorary Doctorate of Humane Letters from both Spring Hill College and Washington College.­