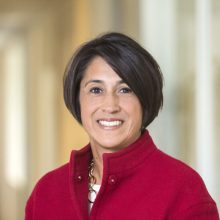 Dr. Jenelle Krishnamoorthy is the Interim Vice President for Global Public Policy at Merck & Co., Inc. and is trained as a licensed clinical psychologist. Jenelle leads regional and therapeutic asset teams globally and is responsible for the development and advocacy of Merck’s positions on cross cutting public policy issues and key therapeutics areas. Prior to joining Merck in January 2015, Jenelle was the Health Policy Director for the Health, Education, Labor and Pensions (HELP) Committee and led the health team in the United States Senate for Chairman Harkin. Dr. Krishnamoorthy first joined Chairman Harkin’s team as an American Association for the Advancement of Science (AAAS) Fellow in 2003 and 2004. During 2004 and 2005 Jenelle worked at the U.S. State Department in the Bureau of South Asian Affairs on health, science, technology, and environment issues with India on an AAAS Diplomacy Fellowship. Early in her career, Jenelle completed her pediatric clinical psychology residency and post-doctoral fellowship at Brown Medical School where she conducted research in the areas of childhood obesity and tobacco issues. Dr. Krishnamoorthy received her B.S. from Randolph-Macon College, M.S. from the University of Tennessee and her Ph.D. from Virginia Commonwealth University.