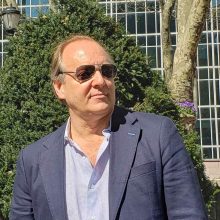 Jeff Oppenheim Is a vetted producer, director, and digital content strategist with a combined background in journalism, public relations and marketing. His project management skills and cultural diplomacy have enabled him to work within both the public and private sectors across four continents and multiple languages.

As a vetted filmmaker, Jeff’s most notable productions include: “Real Fake: The Art, Life and Crimes of Elmyr de Hory” (Producer/Director/Editor), released internationally by Gravitas Ventures (2018); “Kuduro NYC” (Executive Producer), screened at The TriBeCa Film Festival
(2013) and winner of both Dance on Film East and West; “Absolute Funk”, (Produced with Reginald Hudlin), screened at the Apollo Theater, NYC for the Parliamentary Funk concert in celebration of George Clinton’s 70th Birthday (2011); “A Passion for Giving” (Co-Producer/Editor), aired nationally on PBS (2009); and a feature film “Funny Valentine” (Writer/Director/Co-Producer), a romantic comedy starring Anthony Michael Hall and distributed by Universal Pictures (2005).

He has helped a variety of brands bring their story to market by creating extensive short-form content for both the for-profit commercial sector and for non-profit and cultural clients such as; most recently, the “New American Festival” for the New American Economy; “Art Squared” campaign for the French Cultural Services of New York; and currently the live to digital
“Community is at the Center” campaign for the JCC of Harlem (2017). He has produced week-long festivals, concerts, and international tours to include an arts festival for the grand
reopening of The Queens Museum of Art, the “Os Kuduristas” campaign, for Angola, Africa, and “STAT! for NYC Public Hospitals” under Mayor Michael Bloomberg. Among the many live gala events he has produced, is the 2009 Inaugural Party of President Barack Obama in Washington, D.C. at the Newseum (the museum of journalism).

Jeff began his career in journalism writing for Columbia Magazine and InfoWeek (a CMP publication). He currently serves as a Board Member for the Foreign Press Association of New York and as an on-air anchor for their digital content. Subsequently, he has created his unique brand of public speaking and media training and continues to successfully present this program to Fortune 500 companies and major law firms nationwide.