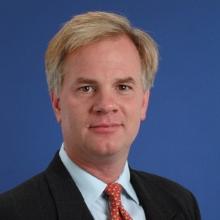 Jay Collins is Vice Chairman of Banking, Capital Markets, and Advisory at Citigroup, with over thirty years of leadership experience at the intersection of international finance and global policy. Collins has advised, structured, and executed complex and innovative transactions for both companies and sovereigns in over 60 countries. He is recognized as a leading advisor to global governments on sustainability and climate finance, privatizations, digital technology, investment, and complex funding solutions and has extensive risk experience as a senior credit officer since 2006.

For the past two years during the Covid crisis, Collins has also served as the senior banker and Financial Advisor for Citi to the Global Vaccine Alliance’s COVAX Facility, advising on financing and risk issues related to equitable distribution of Covid-19 vaccines. Throughout his career, he has had the privilege of advising cabinet-level officials at times of crisis and significant financial duress, including Egypt, Argentina, Greece, Ukraine, Iraq, Ecuador, Pakistan, Nigeria, and Jamaica, executing many of the largest sovereign debt re-profilings and restructurings in the world.

Collins served as Global Head of Citi’s Public Sector Group from 2005-2011. From 2006-2007, Collins was also Global Head of Infrastructure Finance. From 2001- 2005, he was Citi’s Head of Global Banking for Central and Eastern Europe, Middle East, and Africa (CEEMEA). Prior to his CEEMEA position, Collins was Deputy Head and the senior foreigner in Nikko Citigroup’s Investment Banking Division in Tokyo, Japan. He has also served as Chief Operating Officer for the Latin America Region. He has been a Senior Credit Officer of the firm since 2006.

Before joining Citi in 1997, Collins worked for Merrill Lynch on the “NY1” team, (the US large-cap Investment Banking team) and subsequently in Merrill’s Direct Investment Group. He began his career as Executive Assistant to the President of the Center for Strategic and International Studies where he later became Head of Executive and Congressional Relations.

Collins has a Master of Science in Foreign Service from Georgetown University where he graduated with Honors in International Business in 1989. He is a Phi Beta Kappa graduate of Colorado College. He also studied at Waseda University in Japan. Collins speaks Japanese, Spanish and Portuguese.

An Adjunct Professor at Georgetown University, Collins teaches disruptive sustainable innovation and applied tech for development at the graduate level. He also serves on the Boards of Save the Children and the Tent Partnership for Refugees and is involved in a number of geostrategic policy activities as a Board Member of the Center for the Study of the Presidency and Congress, the Leadership Council of Concordia, and a Member of the Council on Foreign Relations. Collins recently Chaired the Report Committee for the UN Secretary General’s Global Investors for Sustainable Development Alliance and serves on its Steering Committee. He is a long-serving member of the Group of Trustees of the Principles for Stable Capital Flows and Fair Debt Restructuring of the Institute for International Finance and represents GISD on the Task Force on Voluntary Carbon Markets, also at the IIF.