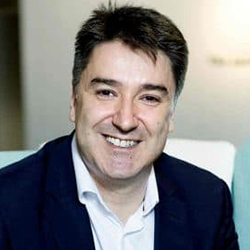 Javier (Javi) is CEO and Chief Sustainability Officer at IKEA U.S. He assumed that role in March 2019.

He first joined in Barcelona, Spain, as a part time co-worker in the self-serve department in 1997, advancing within Ikea Spain in roles such as sales manager and store manager, before joining Ikea UK and Ireland in 2014 as deputy retail manager. In June 2018, he was named country retail manager for the region.