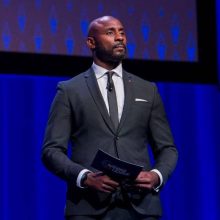 Jason Roberts was named Concacaf Director of Development on November 2017. He is focused on managing and strengthening the Confederation’s core development programs including grassroots, coaching education, and professional football development initiatives. Roberts is based in Miami, Florida and reports to the General Secretary Philippe Moggio.

He is a current member of the FIFA Players’ Status Committee and is a graduate of the UEFA MIP Executive Course designed for former international players to achieve professional excellence in football administration.

The former professional footballer established the Jason Roberts Foundation (JRF) in 2007, the JRF is a charitable organization that provides young people opportunities to learn and build confidence through sport in both the UK and the Caribbean.

In the 2010 New York Honours list, Roberts was appointed a Member of the Order of the British Empire (MBE) for his services to sport in Grenada and London, and, in May 2016, he received an Honorary Doctorate from St. George’s University in Grenada. This was in recognition of his outstanding contributions to the provision of sporting events for disabled children in both Grenada and the UK.

Roberts was a respected football pundit in both the United Kingdom and the Caribbean.  He represented his country, Grenada at the international level, starting his career at Hayes FC and eventually going on to play in the English Premier League with West Bromwich Albion, Portsmouth Wigan Athletic, Blackburn and Reading. He played over 200 matches in the English Premier League and retired from professional football in 2014.