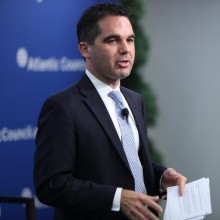 Marczak brings more than fifteen years of experience focusing on regional economics, politics, and development. With Marczak’s leadership, the Arsht Center has established itself as the “go-to” center for analysis, insight, and impact on the new Latin America and its strategic role in the world. He is at the forefront of its influential work on pressing issues: Venezuela’s crisis; NAFTA modernization and trade; China-Latin America ties; Colombia’s peacebuilding; Cuba engagement; Central America’s prosperity; the new Brazil; women’s leadership; and energy’s future.

Most recently, Marczak directed a four-country task force on Central America’s Northern Triangle with General John F. Kelly as the co-chair before he joined the Trump administration. He jointly oversaw a similar bipartisan effort on Colombia, co-chaired by Senators Benjamin Cardin and Roy Blunt. Among his publications, he served as a primary author of Latin America and the Caribbean 2030: Future Scenarios (Dec. 2016), published jointly with the Inter-American Development Bank.

Marczak frequently provides English- and Spanish-language commentary on political and economic issues in Latin America with appearances in hundreds of US and regional press outlets, including a weekly appearance on Bloomberg TV in Mexico. Jason is also a Huffington Post blogger. He has testified before the US Congress on key regional developments.

In addition to his role at the Atlantic Council, Marczak is also an adjunct professor at The George Washington University’s Elliott School of International Affairs. He joined the faculty in August 2016.

Marczak previously served as director of policy at Americas Society/Council of the Americas (AS/COA) in New York City, where he was a cofounder and senior editor of Americas Quarterly magazine. He advanced worked hand-in-hand with corporate executives and senior policymakers to advocate for policy changes that addressed business priorities.

Prior to joining AS/COA in 2006, Marczak was a program officer and founding member of Partners of the Americas’ Center for Civil Society. He managed efforts to ensure civil society participation in multilateral processes, including the Summits of the Americas. From 1999 to 2001, he was a legislative aide in the House of Representatives with a portfolio including trade, foreign affairs, technology, and small business issues. He has also worked at the National Endowment for Democracy and the Andean Community General Secretariat in Lima, Peru.

He received a bachelor’s degree from Tufts University and a master’s degree in international affairs and economics from the Johns Hopkins University Paul Nitze School of Advanced International Studies. While a term member of the Council on Foreign Relations, he served as a member of its 2014 North America Task Force. He is a Board Member of Qualitas of Life Foundation in New York City.