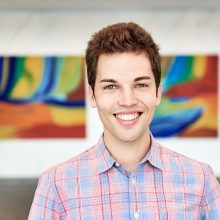 Jake Horowitz is the Co-Founder and Editor-at-Large of Mic, the leading digital media company for society’s change makers who most influence and impact the world. Jake is an on-air correspondent and executive producer of Mic’s video team, where he produces stories from the world’s leading thinkers on the most pressing issues we face as a society, sparking conversations with millions of viewers on a weekly basis. In his tenure, Jake has interviewed some of the world leading thinkers and leaders, including President Obama, Bill Gates, Kim Kardashian West, David Cameron, Shimon Peres, Queen Rania and many more. Prior to Mic, Jake lived and worked on both sides of the Israel­-Palestine conflict, worked for the Carnegie Endowment in Beirut, and helped Change.org inspire people to take action. Jake was named was named to the 2014 Forbes’s 30 Under 30 list and was selected as a United Nations Youth Leader for the Sustainable Development Goals. Jake is a graduate of Stanford University. He lives in New York City.