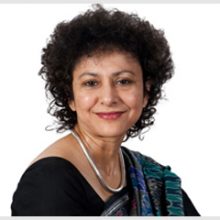 UN Special Rapporteur on the Promotion and Protection of the Right to Freedom of Opinion and Expression, Account United Nations Office of the High Commissioner for Human Rights (OHCHR)

Irene Khan is the UN Special Rapporteur on the promotion and protection of the right to freedom of opinion and expression since 1 August 2020. She is the first woman to hold this position since the establishment of the mandate in 1993. An internationally recognized advocate for human rights, gender equality and social justice, she teaches at the Graduate Institute of International and Development Studies in Geneva, and is co-author of The Unheard Truth: Poverty and Human Rights, which has been published in seven languages. Ms. Khan was Secretary General of Amnesty International from 2001 to 2009. Under her leadership, Amnesty strengthened its work on political and civil rights, especially in the context of counter-terrorism and armed conflicts, while also expanding its mandate to include economic, social and cultural rights. The first woman to head Amnesty International, she launched its first global campaign to stop violence against women and girls. From 2012 to 2019, Ms. Khan headed the International Development Law Organization (IDLO), the only intergovernmental organization exclusively devoted to the rule of law and sustainable development. In that capacity she co-convened the UN Conference in Preparation of the Review of SDG 16 in 2019, the High Level Group on Justice for Women in 2018 and the Conference on Rule of Law in Africa in 2016. She expanded programs on access to justice and championed Sustainable Development Goal 16 on peace, justice, access to information and effective institutions. As Consulting Editor of The Daily Star in Bangladesh from 2010 to 2011, Ms. Khan covered human rights, democracy and gender issues and supported independent media. She was Visiting Professor at the State University of New York Law School in 2011 and Chancellor of Salford University in the UK from 2009 to 2015. She began her professional career with the UN High Commissioner for Refugees, working for 21 years at headquarters and in various country operations, including Chief of Mission in India and Deputy Director, Division of International Protection. Ms. Khan collaborates with the Columbia Global Freedom of Expression program, including as a member of the Jury of the Global Freedom of Expression Awards. She was a member of the World Bank Gender Advisory Council, the UNAIDS High Level Panel on HIV Prevention and Human Rights, and the UN Global Compact Advisory Council. She sits on the governing boards of the Overseas Development Institute (UK), BRAC (Bangladesh) and Barefoot Law (Uganda). Ms. Khan has received several awards, including the Sydney Peace Prize in 2006, for her contribution to human rights. Born in Bangladesh, she studied at Manchester University and Harvard Law School.