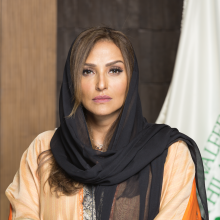 Her Royal Highness Princess Lamia Bint Majed Saud AlSaud is the Secretary General and member of the Board of Trustees at Alwaleed Philanthropies. She is the daughter of Prince Majed bin Saud, the son of King Saud bin Abdulaziz AlSaud.

For over 38 years, Alwaleed Philanthropies has supported and initiated projects in over 164 countries regardless of gender, race, or religion. The foundation collaborates with a range of philanthropic, government, and educational organizations to combat poverty, empower women and youth, develop communities, provide disaster relief and create cultural understanding through education. Working with its partners, Alwaleed Philanthropies seeks to build bridges for a more compassionate, tolerant, and accepting world.

Princess Lamia was appointed Secretary General of Alwaleed Philanthropies in April 2016, having previously served as Executive Manager of Media & Communication at the foundation.

Princess Lamia earned her Bachelor of Arts degree in 2001 from Misr International University, Cairo, majoring in Public Relations & Marketing Advertising with a minor in Journalism. In 2003, she started the publishing company, Sada Al Arab. The company produced three magazines and was operated from Cairo, Beirut and Dubai. She also became a partner in a number of marketing companies based in Egypt, Lebanon and Saudi Arabia in 2006.

In 2010, Princess Lamia published her first novel, Children & Blood, through Dar Al Saqi, one of the most respected independent publishing companies in the Middle East. The book tackles the complex issue of honour killings, and reflects on the harsh realities with which women in the Middle East are faced with.

In 2017, Her Royal Highness received an honorary medal from the Vice President of Laos, Dr. Phankham Viphavanh in recognition of her philanthropic efforts in the country. That same year, Princess Lamia was announced winner of the Achievement in Philanthropies Award at the Arab Women of the Year 2017, held in London.

Princess Lamia received the first of its kind “Change Maker Award” at the Aid & Trade Conference in London in recognition of her humanitarian and philanthropic efforts worldwide.

Her Royal Highness was also presented with National Council’s first-ever Philanthropic Leadership Award to HRH in Washington, DC, “in recognition of HRH’s efforts to contribute to a more compassionate, tolerant, and accepting world.”

In 2018, she was awarded the “Woman Leader in Community Development Excellence Award” which was given by the Middle East Excellence Awards Institute honoring women leaders and executives in Dubai, UAE.

In March 2018, Princess Lamia was honored with the Baden Powell Fellowship pin by the World Scout Foundation in recognition of AP’s contributions to the WSF’s support of youth around the world.