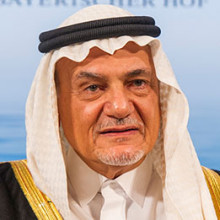 His Royal Highness Prince Turki Al-Faisal was born on February 15, 1945 in Makkah, Saudi Arabia. HRH began his schooling at the Taif Model School and then went on to complete his high school diploma at the Lawrenceville School in Princeton. HRH went on to study at several universities including Georgetown University, class of 1968.

His Royal Highness was appointed as an Adviser at the Royal Court in 1973. In 1977, HRH was appointed Director General (with a rank of Minister) of the General Intelligence Directorate (GID), Saudi Arabia’s main foreign intelligence service. HRH served as the head of the GID until August 2001.

His Royal Highness is a founder and trustee of the King Faisal Foundation as well as the Chairman of the King Faisal Centre for Research and Islamic Studies.
HRH is also a Trustee of the Oxford Islamic Center at Oxford University and the Center for Contemporary Arab Studies (CCAS) at Georgetown University. He is a member of the Board of Advisors of the Munich Security Conference.

HRH is the recipient of the Crans Montana Forum medal which is awarded on exceptional occasions and by special decision in recognition of successful achievements in favor of a more humane world. In 2010 he received an honorary PhD in law from the University of Ulster in Ireland and in 2011 he was awarded an honorary PhD in international politics from the University of Hankuk in Korea.

HRH is a visiting Distinguished Professor at Georgetown University and is also a Lamont Lecturer at the Belfer Center for Science and International Affairs at Harvard University.

He is married to HRH Princess Nouf bint Fahd. He has six children, including Faisal T. Al-Faisal ’94 and Saud T. Al-Faisal ’07 and several grandchildren.