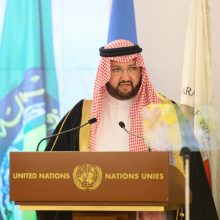 In his own right, Prince Abdulaziz bin Talal Al-Saud is deeply invested in humanitarian and philanthropic efforts, sits on the Advisory Board for the New York-based Concordia Summit, and is a co-chair for the National Council on U.S.-Arab Relations (NCUSAR) International Advisory Committee.

In October 2020, His Highness was appointed as Chairman of Arab Gulf Program for Development (AGFUND). Established by his late father and the heads of states of the GCC countries, AGFUND aims at the roots of human development problems, targeting all segments of society without discrimination. In partnership with 44 international, regional, and governmental organizations, it has 1,578 projects in 133 countries. He also actively sits as Chairman for four of the five specialized development organizations established by AGFUND including, Arab Open University (AOU), Arab Council for Childhood and Development (ACCD), and Center of Arab Woman for Training and Research (CAWTAR).

His commitment to his homeland has remained a constant throughout his life. In 2018, he co-founded the Ahyaha Foundation in partnership with his wife, Princess Sora bint Saud Al-Saud, with the mission of improving the community through sustainable, creative, and social programs. The foundation’s crucial humanitarian works support childhood and social development, female empowerment, and scholarship programs and undertake other innovative projects to further its mission.

His Royal Highness also has a passion for engaging with today’s youth. His involvement has included lectures at several universities abroad, such as The Sorbonne in Paris, Arab Open University (AOU) in Kuwait, Bahrain, Saudi Arabia, Ankara University in Turkey. His Highness has delivered lectures in the United States at Brigham Young University (BYU), American University (AU), and Robert Morris University (RMU).