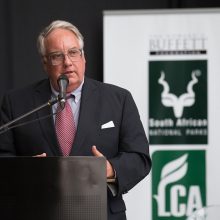 Mr. Buffett manages a 1,500-acre family farm in central Illinois and operates a 400-acre farm in Nebraska. He oversees three Foundation-operated research farms in Arizona, Illinois, and Nebraska totaling 9,500 acres, and oversees two ranches in Arizona, and one farm in Texas, all adjacent to the U.S./Mexico border.

Mr. Buffett currently serves on the corporate board of Berkshire Hathaway, Inc. and has served on a number of Fortune 500 boards as well as held several senior corporate executive positions. He was elected and served as a Commissioner on the Douglas County Board in Nebraska from 1989-1992 and served 20 years on the Commission on Presidential Debates.

He has been honored over the years for his leadership and contributions to agriculture, conservation, philanthropy, and journalism, including receiving the highest honors bestowed on a foreign citizen by the governments of Mexico, Colombia, and Rwanda for his work in each country.

Mr. Buffett has traveled to over 150 countries and authored eight books on conservation, wildlife, and the human condition, including two New York Times bestsellers, 40 Chances: Finding Hope in a Hungry Worldand Our 50-State Border Crisis: How the Mexican Border Fuels the Drug Epidemic Across America. He is the executive producer of Virunga, an award-winning and Academy Award-nominated documentary about Africa’s oldest national park, and The River and the Wall, a documentary film about the Texas/Mexico border.