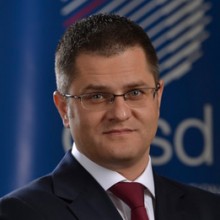 Vuk Jeremić was elected President of the sixty-seventh session of the United Nations General Assembly on 8 June 2012. At the time of his election, he was serving as Minister of Foreign Affairs of the Repubic of Serbia, an office he held starting on 15 May 2007.

During his term as Foreign Minister, Mr. Jeremić was actively involved with deliberations of the Organization for Security and Co-operation in Europe (OSCE), participating in meetings of its Ministerial Council; informal meetings of OSCE foreign ministers (Almaty, Kazakhstan, 2010 and Corfu, Greece, 2009); and in the eleventh OSCE Summit that took place in Astana, Kazakhstan (2010).

In 2011 and 2012, Mr. Jeremić presided over a number of regional organizations of South-East Europe, including the Central European Initiative, the Adriatic Ionian Initiative and the Southeast Europe Cooperation Process. In this capacity, he addressed several special sessions of the OSCE Permanent Council in Vienna. During this period, Mr. Jeremić also served as head of the Migration, Asylum and Refugees Regional Initiative and the Black Sea Economic Cooperation Organization.

In 2010 and 2011, Mr. Jeremić played a leading role in convening two groundbreaking conferences of foreign ministers, aimed at resolving the plight of refugees uprooted by the 1991-1995 crisis in the Western Balkans.

Mr. Jeremić began his career in public service as Adviser to the Minister of Telecommunications of the Federal Republic of Yugoslavia, in the year 2000. In June 2003, he was appointed Adviser for Foreign Affairs to the Minister of Defence of the State Union of Serbia and Montenegro, and in February 2004, he was appointed Chairman of the Foreign Affairs Committee of the Democratic Party. Later that year, in July 2004, he became Senior Foreign Policy Adviser to the President of the Republic of Serbia, continuing in this capacity until taking up the position of Foreign Minister in May 2007.

Before entering the political sphere, Mr. Jeremić worked for a number of financial institutions in London, including Deutsche Bank and Dresdner Kleinwort Benson, as well as for AstraZeneca Pharmaceuticals.

Mr. Jeremić has lectured at major universities around the world, and participated in debates and discussions convened by think tanks and organizations focusing on global issues, including the Economist magazine, World Economic Forum, Chatham House, the Bled Strategic Forum, the Aspen Institute and the MEDays Forum of the Amadeus Institute. His opinion pieces have been published in major newspapers including The New York Times, International Herald Tribune and The Wall Street Journal.

Fluent in English, in addition to his native Serbian, Mr. Jeremić holds a Bachelor of Science degree in theoretical physics from Cambridge University (United Kingdom) and a Masters in Public Administration from Harvard University’s John F. Kennedy School of Government (United States).

Mr. Jeremić was born in Belgrade in 1975, and is married to Nataša Jeremić.