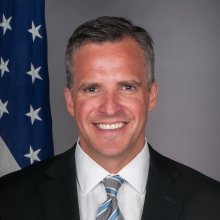 Rufus Gifford served as United States Ambassador to the Kingdom of Denmark from August 2013 – January 2017. As Ambassador, his personal mission was to transform a historically great relationship to meet the challenges of the future by engaging Danes – especially younger Danes – on bilateral and global issues. Determined to modernize diplomacy and build back trust in institutions, Gifford pursued a never-before-seen public diplomacy strategy, allowing cameras to document his life and his work. The award-winning documentary series titled “I am the Ambassador” was bought by Netflix and iTunes and is currently being aired on television in over 10 countries. CNN called him the “anti-Trump”, the Wall Street Journal deemed him a “viral sensation”, and The Atlantic called him a “rock star”. Gifford was knighted by the Queen of Denmark in January
2017.

Following the 2004 election, Ambassador Gifford started his own political consultancy business and worked for numerous U.S. Senators and California politicians before meeting then-Senator Barack Obama in January 2007. He worked on President Obama’s 2008 presidential race in California and moved to Washington, DC following Obama’s historic election. There he took the fundraising reins of the Democratic National Committee in 2009 as Finance Director. At the start of the 2012 election, Ambassador Gifford moved to Chicago to help launch the re-election campaign of the President. He served as a Senior Staff member and Finance Director of the campaign – ultimately responsible for its more than billion dollar budget.

An avid runner, cyclist, and sailor, Ambassador Gifford enjoys the outdoors. Gifford is married to veterinarian Dr. Stephen DeVincent and they share their home with their Golden Retriever, Argos.