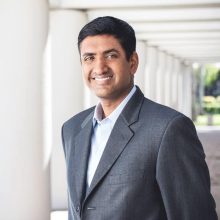 Representative Ro Khanna represents California’s 17th Congressional District, located in the heart of Silicon Valley, and is serving his third term. Rep. Khanna sits on the House Committees on Agriculture, Armed Services, and Oversight and Reform, where he chairs the Environmental Subcommittee. Additionally, Rep. Khanna is the Deputy Whip of the Congressional Progressive Caucus; serves as an Assistant Whip for the Democratic Caucus and is the Democratic Vice Chair of the House Caucus on India and Indian Americans.

Rep. Khanna is working to ensure our nation is focused on creating new tech jobs across the country, particularly for American left behind, and investing in science and technology to win the 21st Century. This includes job training programs, economic development initiatives, re-wiring the U.S. labor market, and debt-free college to help working families prepare for the future. He is also committed to advancing a foreign policy of military restraint and diplomatic engagement. Instead of spending trillions on wars overseas, Rep. Khanna believes we should invest in priorities at home like Medicare for All, Debt Free College, and a new 21st Century infrastructure.