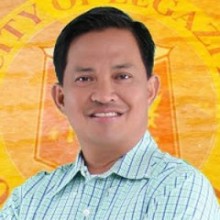 • An undefeated politician who started his career in politics as Barangay Chairman of Barangay Gogon, Legazpi City, elected and served as City Councilor for two (2) terms and won as Mayor in 2001; completed three (3) consecutive terms as Chief Executive and re-elected with no opponent in 2013;

• A strong advocate of public-private partnership, good governance and transparency;

• A visionary leader whose utmost concern is the welfare of the majority, especially the marginalized sector of society;

• Consistently brought Legazpi City to higher levels of social development and economic prosperity as well as wider horizons of opportunities;

• A Tourism Champion, an Engineer by profession and an outstanding public servant by merit and performance;