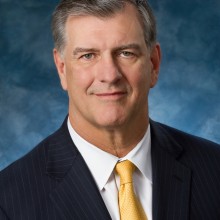 Mike Rawlings came to Dallas in 1976 with a couple hundred dollars in his pocke​t and plans to work as a radio reporter. He didn’t think he’d stay long. But over the next four decades, Rawlings proved that Dallas is truly a city of opportunity.

The Borger, Texas, native worked his way up from an entry-level position at TracyLocke, then the largest advertising agency in the South, to become the CEO. Later, he took the helm of the world’s largest pizza company, Pizza Hut, and grew it to record sales. Mayor Rawlings previously served as Chairman and Managing Partner of private equity firm CIC Partners, where he is currently the Vice Chairman.

Public service has long been important to the 1976 Boston College graduate. He previously served as Chair of the Dallas Convention & Visitors Bureau, the city’s Homeless Czar and Park Board President.

Mayor Rawlings decided in early 2011 to run for Dallas Mayor on a platform that highlighted southern Dallas as the city’s greatest untapped resource. Following his June 2011 election, he launched GrowSouth, his signature initiative to spur economic development south of the Trinity River. He’s also fought to improve public education, combat poverty, revitalize Fair Park, develop the Trinity River corridor, elevate the city’s international profile and turn our city into a top destination for artists all over the world. He’s drawn headlines across the country for his bold campaign against domestic violence, Dallas Men Against Abuse. He has presided over the passage of $600 million in new city bonds to fund streets, flood protection and economic development initiatives and he has twice led the City Council through the hiring process for a  city manager and city attorney.

During Mayor Rawlings’ time in office, Dallas has experienced impressive economic growth. Unemployment as of September 2016 had dropped to 4.2 percent. The City of Dallas property tax base in 2016 is $110.3 billion, which is higher than the previous peak in 2009 ($90.5 billion) and represents a 10.4 percent increase over 2015.

Mayor Rawlings was re-elected to a second four-year term in May 2015, beating his challenger in all but one of 14 City Council districts. He continues to put Dallas in the national spotlight, in part through his post as an executive committee member for the U.S. Conference of Mayors.

Rawlings and his wife, Micki, live in the Preston Hollow neighborhood of North Dallas. Their two children, Gunnar, an educator, and Michelle, an artist, also live in the city.​