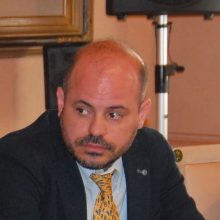 Lefteris Papagiannakis was born in France in 1971. He completed his primary and secondary education in Greece. He returned to France to study public law in the University of Lille II, followed by a DEA in European Community Law and International Economy. After the completion of his studies he worked in the European Parliament as a parliamentary assistant. Since then he also worked on the education of the muslim minority in Greece (in Thrace), as a legal counselor for the political party Ecologists Green and the Special Secretariat on environmental inspection. He was elected in the municipal council of Athens in 9/2014 and named vice mayor on migrant and refugee affairs in 3/2016. He is the chair of the working group Migration and Integration of the Eurocities Network and vice President for Refugee Issues of ECCAR (European Coalition of Cities against Racism) and president of the Council for the Integration of Migrants of the Municipality of Athens.