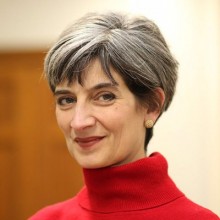 U.K. Ambassador to the Hellenic Republic

Kate Smith CMG was appointed Her Majesty’s Ambassador to the Hellenic Republic in January 2017.  Previously she was Director, Americas in the FCO,  where her work focussed on expanding the UK’s presence and engagement with Latin America. She had returned to the FCO after four years working in the private sector, as Head of UK Government relations for Shell, where she was responsible for engagement with the UK government on Shell’s global and British business interests. Prior to this, Kate served as Deputy Head of Mission in Tehran from 2005-7, following roles in London on Iraq during and the aftermath of the 2003 conflict.

Her FCO experience also includes multilateral work, in arms control and disarmament, non proliferation and international peace and security, in particular at the UK Mission to the UN in New York from 1997-2001, where she was principally involved in negotiations on the UN’s operation in Sierra Leone.   Kate began her diplomatic career overseas in Athens in 1991-4, serving as 2nd Secretary Political and Press Attaché.   She was born near London and graduated from Oxford University in Politics, Philosophy and Economics in 1986.