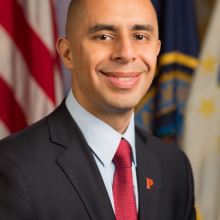 As Providence’s 38th Mayor, Jorge O. Elorza has strived to build a Providence that works for all of its residents. Since taking office in January 2015, Mayor Elorza has prioritized education, ensuring transparency in city government, improving city services and providing a sound financial future for the capital city.
Driven by the belief that all children should have the opportunity to thrive in a supportive environment, Mayor Elorza is confident there is no better investment Providence can make than investing in the future of its youth. In addition to hosting the first ever All In: Providence Education Summit, Mayor Elorza has prioritized preparing youth for success by increasing summer education and employment opportunities, improving access-to-technology by introducing 8,000 new computers in schools and continued support for Providence Talks, a nationally recognized program aimed at addressing the word gap. These pro-growth and progressive polices are putting Providence on the path to becoming the top urban school district in New England.
Under Mayor Elorza’s leadership, the city has practiced responsible budgeting practices and streamlined services across city departments resulting in the largest operating surplus realized in over 20 years ($10.3M). In November 2016, Fitch Ratings cited the city’s surplus, structural changes to the FY17 budget, and the elimination of risk of one-time revenues as rational to upgrade the city’s credit rating by two grades, from a BBB- to an A-.
Mayor Elorza believes that city services should be innovative, efficient, transparent and accessible for all residents and visitors. In March 2016, under his leadership the Mayor’s Center for City Services launched the PVD311 system for 24/7 access to constituent services. By streamlining processes, providing customer service training and continuously encouraging city staff to look for efficiency in all transactions, City Hall has taken strides in providing high quality city services.
As a member of the United States Conferences of Mayors, Mayor Elorza serves as Vice Chair of the Standing Committee on Community Development and Housing, co-chairs the Committee for Immigration Reform, and is a member of the Conference’s Advisory Board. The Mayor has been an outspoken national voice on issues such as immigration reform, healthcare, and environmental protection, placing an emphasis on the work done at the local level.
Born and raised in Providence, Mayor Elorza is a graduate of Classical High school, the University of Rhode Island, and Harvard Law School. Prior to being elected Mayor, he served as a Providence Housing Court Judge and co-founded the Latino Policy Institute while he served as a professor at Roger Williams Law School. As an avid cyclist Mayor Elorza frequently commutes by bicycle from his home in Silver Lake to City Hall.