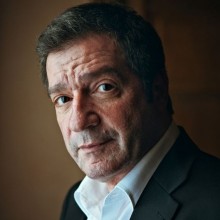 Georgios Kaminis was elected Mayor of Athens in November 2010 and re-elected for a second term in May 2014.

Prior to his election as Mayor of Athens, Mr. Kaminis served as Deputy Ombudsman for Human Rights from 1998 to May 2003. In 2003, he was unanimously elected Greek Ombudsman by the Greek Parliament, and re-elected for a second term in 2007. In August 2010, Mr. Kaminis resigned from this position in order to stand as an independent mayoral candidate for the City of Athens.

Mr. Kaminis is an Assistant Professor of constitutional law at the University of Athens, Faculty of Law and a member of the scientific staff in the Department of Parliamentary Studies and Research of the Greek Parliament. In 2016 he was the winner of the World Mayor Commendation for services to refugees.

He studied law at the University of Athens and holds a doctoral degree (Doctorat d’Etat) from the University of Paris I. He was born in New York City and has also lived in Osaka, Paris, Madrid and Heidelberg. In addition to his native Greek language, he speaks fluently English, French, Spanish and German.

Mr. Kaminis is married and has two children.