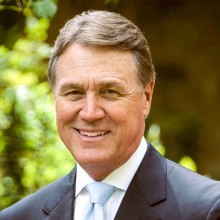 David Perdue is a successful business leader with 40 years of real world business experience who helped grow some of America’s most recognizable companies including Sara Lee, Haggar, and Reebok. As a Fortune 500 CEO, David led the impressive expansion of Dollar General, creating thousands of quality jobs and adding billions to the value of the company.

While working his way to the top of the business world, he gained a firsthand understanding of the global economy and the impact government policies have on businesses. David has lived and worked in Europe, Asia and throughout the United States, but he always relied on the values he learned from his Middle Georgia upbringing.

Perdue was born in Macon, Georgia and raised in Warner Robins, the son of two educators. His parents were both the first in their families to go to college. From an early age, David was taught the importance of a good education. His father eventually became the well-respected superintendent of Houston County Schools.

David was expected to lead by example, which meant hard work in the classroom during the school year and hard work in the fields of family farms during the summer months. One of his first jobs was in a Head Start program where he saw firsthand how important early learning is to ultimate success in school.

At Georgia Tech, David earned a degree in Industrial Engineering while working warehouse and construction jobs. After graduating, he married Bonnie, whom he had met in the first grade and they have been married for 41 years. Perdue worked full-time with Kurt Salmon Associates while enrolled in graduate school and Bonnie taught school in Gwinnett County.

David earned his second degree from Tech, a master’s in Operations Research. After completing his academic work at Tech, Perdue began a professional career that took him around the globe and to the helm of major corporations.

As a Principal of Kurt Salmon Associates, a management consulting firm, David helped dozens of companies improve their products and expand operations. He quickly learned that his best ideas came from working on the factory floor and talking with employees.

This personal, hands-on approach was more effective than anything Perdue learned from a textbook. He developed a deep understanding of manufacturing, a genuine connection with co-workers, and the ability to utilize those strengths anywhere in the world.

As President and CEO of the Reebok brand, he was credited with revitalizing the athletic brand. And as Chairman and CEO of Dollar General, he oversaw the company’s expansion from 5,900 to 8,500 stores nationwide creating thousands of quality jobs. While at Dollar General, he became heavily involved in literacy and served as Chairman of the National Commission on Literacy and Workforce Development.

David has proven himself in international business and has happily settled back in his home state of Georgia. He currently sits on the Board of Directors of five major corporations and is active in Perdue Partners, a Georgia-based global trading company that he co-founded.

Perdue recently served as an appointee to the Georgia Ports Authority and is a Trustee and Treasurer of the Georgia Tech Foundation. David and Bonnie have two sons and three grandsons. The couple attends Wesley United Methodist Church in St. Simons.