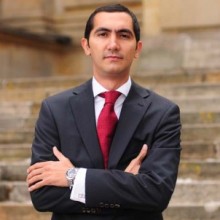 Congressman, Congress of the Republic of Colombia

David Barguil Assis is currently one of the youngest Congressmen in Colombia, elected with only 28 years for the 2010-2014 period in the House of Representatives and reelected with the highest number of votes of the Conservative Party in 2014-2018. David Barguil’s political platform is focused on educations and the lower income Colombians, as Congressman his legislative work is mainly concerned with finding new resources for education and with introducing new proconsumer regulation in sectors such as Banking, pensions and telecommunications. He has also led key legislative oversight exercises in relation to energy policy, against banks abusive practices, and corporation practices in breach of free competition regulation. David Barguil finished his bachelor in finance, government and international relations at the Externado University of Colombia and won a scholarship in Economy and Politics at the Université de Montréal. He is also specialized in contractual law and undertook a Masters at IE University in Leadership and Strategy.