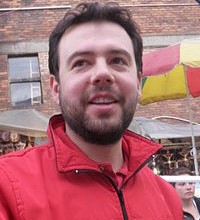 Senator, Congress of the Republic of Colombia

Carlos Fernando Galán Pachón was born in 1977 in Bogotá and is the youngest of the three children of Luis Carlos Galán, the founder of the New Liberalism assassinated in 1989 by Pablo Escobar. He comes from a family of politicians as well as journalists, the two professions he has practiced until now.

Politics comes on the paternal side: outside his father who went from councilman to presidential candidate, his grandfather Mario Galán was an important liberal leader of Santander. And journalism, on the maternal side: his mother, Gloria Pachón, worked in the Time and was director of Noticiero de Novia and his grandfather Álvaro Pachón de la Torre was a columnist for El Espectador.

From a young age, Galán was exposed to both worlds. Although Luis Carlos Galán was assassinated when Carlos Fernando was only 12 years old, he was able to accompany him in campaign events and toured the country twice with him on national tours as a child.

He made his university career in the United States. He studied International Relations at Georgetown University and did a major in government, management and public affairs at Externado de Colombia, a program in partnership with Columbia University. At that university he started a Masters in International Affairs, which he did not have until his return to work as a journalist. Earlier, while studying in Washington, between 2000 and 2001, he began working as a correspondent for Semana Magazine.

He then worked at the OAS as an advisor to César Gaviria when he was Secretary General between 2001 and 2003. In that position he got even closer to the former President (who was already close thanks to Gaviria’s passage for Luis Carlos Galán’s New Liberalism) and began to gain experience in crisis management. He specialized in issues related to the Democratic Charter and the democratic facilitation process in Venezuela following the 2002 coup. He was also an Electoral Observer in the 2001 presidential elections in Nicaragua, which Enrique Bolaños eventually won.

On his return to Colombia he became editor of the “Country” section of Cambio magazine between 2003 and 2004, where he began to investigate Colombian politics.

Then for two more years he was the political editor of El Tiempo, where he won the National Journalism Prize of the Bogota Journalists’ Circle for “best work in the press” for a series of articles on parapolitics in 2007.

At the beginning of 2007, Germán Vargas Lleras – who is also close thanks to the New Liberalism – proposed that he be candidate of his party Radical Change to the Council of Bogota. This meant moving away from the Liberal Party, where his father and his brother Juan Manuel was elected Senator in 2006. But Carlos Fernando accepted the proposal and ended up being elected in 2007 with 48,000 votes.

He was the highest-ranking Councilor in Bogota and, since reaching the Council, taking advantage of his contacts with the media from which he came, Galán was positioned as one of the chief detractors of Mayor Samuel Moreno . He was one of the main critics of the management that the Mayor gave to the problem of internal mobility of Bogota.

Along with other councilors like Antonio Sanguino, Carlos Vicente de Roux and sometimes Angela Benedetti, became one of the main promoters of political control debates and, since 2009, began to report irregularities in public procurement. In 2010, he denounced the irregularities in the businesses of the businessmen Julio Gómez and Emilio Tapia, who ended up being a key trigger of the scandal of the “Cartel de la Contratación”.

Since mid-2010 Galán began to sound like the possible candidate of Radical Change to the Mayor’s Office.In March 2011 he made his candidacy for that party. Despite the close ties between the Liberal Party and Radical Change, which in fact were allies in much of the country, Galán and liberal candidate David Lunanever materialized an alliance. However, Galan ended up having the fourth highest vote (284,989 votes totaling 12.70% of the vote) above Luna.

That year the party chose him as its director to replace Germán Varón Cotrino , and Galán had to deal with the scandal of the guarantees of more than 300 Radical Change candidates questioned by judicial investigations, many of them by processes of parapolitics. The Party was in a moment of great division, because there were those who thought that the defendants should be supported, and others who asked that all be withdrawn the endorsement. In the end Galán withdrew the endorsement to more than 150 candidates .

At the beginning of 2012, Galán joined the government of Juan Manuel Santos , who appointed him as an Anticorruption and Transparency Secretary, a position that did not exist and that the former mayoral candidate had premiered. Among its functions were to advise directly the President, to serve as secretary of the National Commission for Moralization and to coordinate the design of the integral policy against corruption.

In September 2013 he was named president of Cambio Radical, in order to keep the party afloat and prepare it for the 2014 elections. It was also announced as head of the Senate list for Radical Change.