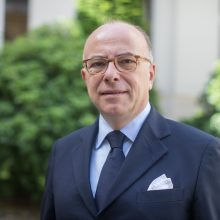 Graduate of the Institute of Political Studies of Bordeaux, Bernard Cazeneuve is a lawyer.

Bernard Cazeneuve was an elected official in the Manche departement between 1994 and 2012, including being Member of Parliament and Mayor of Cherbourg.

After the election of President François Hollande, he was appointed, in 2012, Minister for European Affairs, in 2013, Minister for the Budget. In 2014, he became Minister of the Interior, a position he held until December 2016. Bernard Cazeneuve was then appointed Prime Minister by François Hollande, until the resignation of his government on May 10, 2017. He then joined AUGUST DEBOUZY, a Paris law firm, as Partner.

Born June 2, 1963 in Senlis, Bernard Cazeneuve is married and has two children.