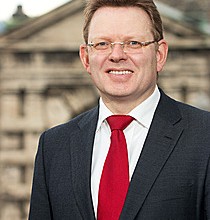 Dr. Andreas Hollstein studied Law and earned his PhD at the University of Bonn.
From 1993 until 1995 he worked for the Head of Division at the Embassy of the Republic of Lithuania. After this he was Research Assistant of Wolfgang Lohmann MP and in the CDU/CSU fraction in the German Bundestag in the areas of social welfare and the benefits act for asylum seecers.

He became Honorary 1st Deputy Mayor of his home town Altena in 1994 and has been Mayor of the City of Altena since 1999.