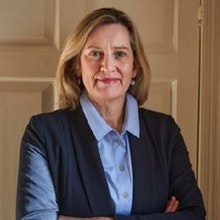 After a career in business Amber Rudd became the Member of Parliament for Hastings and Rye from 2010 to 2019.

She held three cabinet roles over 4 years and under 3 Prime Ministers, first in Energy & Climate Change, then the Home Office as Home Secretary and until September 2019 in Work and Pensions.

Amber was appointed Secretary of State for Energy and Climate Change in 2015 and led the UK team to the successful completion of the Paris Climate Change Agreement. This UN sponsored Conference of the Parties (COP 21) achieved the first ever legally binding global commitment to reduce national carbon emissions.

From July 2016 to April 2018, Amber served as Home Secretary. During 2017, Amber responded to the succession of terrorist attacks, calling for an international response to take radicalising material off the internet. That was achieved and endures as the Global Internet Forum for Counter Terrorism.

From November 2018 to September 2019, Amber served as Secretary of State for Work and Pensions. She has also served as Minister for Women and Equalities.

Since leaving Government at the end of 2019 Amber has taken up roles in the energy transition sector.

She has become a Trustee for The Climate Group working with businesses and Government to promote tangible climate action.

She chairs the International Advisory Group for Equinor, the Norwegian energy transition company.

She is an advisor for Teneo.

She is a regular contributor to media and on international discussion panels on low carbon energy and how to get global action, particularly in the run up to the critical COP 26 meeting in Glasgow in November 2021.