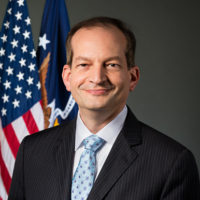 President Donald J. Trump nominated R. Alexander Acosta to be the 27th United States Secretary of Labor. He was sworn in on April 28, 2017.

Secretary Acosta is the son of Cuban refugees, a native of Miami, and first-generation college graduate. He earned his undergraduate and law degrees from Harvard University.

Following law school, he worked as a law clerk for Justice Samuel A. Alito, Jr., at the U.S. Court of Appeals for the Third Circuit. He then worked at the law firm of Kirkland & Ellis and went on to teach at George Mason University’s Antonin Scalia School of Law.

Secretary Acosta has served in three presidentially appointed, Senate-confirmed positions. In 2002, he was appointed to serve as a member of the National Labor Relations Board, where he participated in or authored more than 125 opinions. In 2003, he was appointed Assistant Attorney General for the Civil Rights Division of the U.S. Department of Justice, and from 2005 to 2009 he served as the U.S. Attorney for the Southern District of Florida.

Most recently, Secretary Acosta served as the dean of the FIU College of Law.

Secretary Acosta has twice been named one of the nation’s 50 most influential Hispanics by Hispanic Business magazine. He was also named to the list of 100 most influential individuals in business ethics in 2008. In 2013, the South Florida Hispanic Chamber of Commerce presented him with the Chairman’s Higher Education Award in recognition of his “outstanding achievements, leadership and determination throughout a lifetime of caring and giving back to the community.”

Secretary Acosta and his wife enjoy spending time together as a family, raising their two daughters.