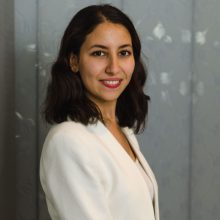 Hind Ait Mout is a Junior student at New York University Abu Dhabi, majoring in Economics and minoring in Applied Mathematics. At the age of 16, she decided to leave her native country of Morocco to seek an international education. She first moved to the UK to join the United World College (UWC) for high school. After graduation, she began to pursue her undergraduate studies in Abu Dhabi, Djibouti, Shanghai, and New York. Throughout her journey, Hind lived and worked with over 115 nationalities on various projects and activities, which allowed her to open up to different cultures and challenge various stereotypes. Hind’s international exposure also made her fluent in English, French and Arabic and a beginner in Mandarin. She aspires to work in the financial services sector and is particularly interested in working on investments and projects with the aim of creating a positive impact on communities.