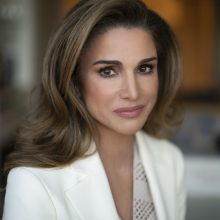 of the Hashemite Kingdom of Jordan

An active humanitarian and mother of four, Queen Rania’s work has focused on empowering local communities and women, improving education, driving innovation and entrepreneurship through society, and finding innovative solutions to the world’s greatest challenges. An advocate for tolerance and cross-cultural dialogue, she is an influential voice on fighting stereotypes of Arabs and Muslims, and fostering greater understanding between people of different faiths. Additionally, Her Majesty advocates for the rights, needs, and aspirations of refugees and the world’s most vulnerable populations. She has taken part in numerous global events in support of refugees, and has visited refugee camps in Jordan, Greece, and Bangladesh.

Through her position on their boards, Queen Rania continues to contribute to the work of the United Nations Foundation (UNF) and the World Economic Forum (WEF). She is also UNICEF’s first Eminent Advocate for Children, a member of the International Rescue Committee’s (IRC) Board of Advisors, and a member of Prince William’s Earthshot Prize Council.

In recognition of her work, Her Majesty has received a number of prestigious local, regional, and international awards. These include the Foreign Press Association’s Humanitarian Award; the Andrea Bocelli Humanitarian award; the World Childhood Award, granted by Her Majesty Queen Silvia of Sweden; the Atlantic Council Global Citizen Award; the Walther Rathenau Prize; the Vital Voices Global Trailblazer Award; and the Zayed Award for Human Fraternity as well as the Path to Peace Award, both of which Her Majesty received jointly with His Majesty King Abdullah II.