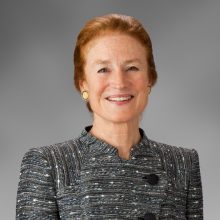 Henrietta H. Fore has been a recognized leader in the United Nations, business, nonprofit organizations and the United States Government. From 2018 to 2022, Ms. Fore served as Executive Director of the United Nations Children’s Fund (UNICEF), working in 192 countries and territories to save children’s lives, to defend their rights, and to help them fulfil their potential. A $7 billion agency with a staff of over 20,000 works in health, education, nutrition, water, sanitation and protection. Innovation hubs in 5 thematic areas are opening in 5 countries. Programs include the world’s largest procurement and delivery of childhood and COVID vaccines and connecting every school and learner to distance learning and the internet to reimagine education with foundational, transferable, occupational and digital skills. Since stepping down from UNICEF on January 31, 2022, Henrietta has joined the Corporate Boards of Imperative Care as a Director, EQT Future as a Mission Board Member, Global Preparedness Monitoring Board (GPMB) as a Board Member and has returned to the Center for Strategic and International Studies (CSIS) as a Board Trustee. During her career, Ms. Fore has worked with leaders and policy makers across the world. From 2007 to 2009, Ms. Fore served as the Administrator of the U.S. Agency for International Development (USAID), and Director of United States Foreign Assistance, holding the equivalent rank as Deputy Secretary of State. Ms. Fore was the first woman to serve in these roles. She was responsible for managing $39.5 billion of U.S. foreign assistance annually, including support to peoples and countries recovering from disaster, and building their futures economically, politically and socially. She served on the Boards of the Overseas Private Investment Corporation, and the Millennium Challenge Corporation. Ms. Fore received the Distinguished Service Award in 2009, the highest award the Secretary of State can bestow. From 2005 to 2007, Ms. Fore served as Under Secretary of State for Management, the Chief Operating Officer for the Department of State. She was responsible for the people, resources, facilities, technology and security of the Department and was the Secretary’s principal advisor on management issues. She oversaw a management budget of $3.6 billion, 7,200 employees, 30,000 contractors and 267 embassies and posts in 172 countries. Ms. Fore served as the 37th Director of the United States Mint in the Department of Treasury from 2001 to 2005. She managed the world’s largest manufacturer of coins, medals, and coin products. The United States Mint produced 13 billion coins in 2004 for the nation’s trade, as well as gold, silver and platinum bullion coins and commemorative coins and medals for investors and collectors. She was elected President of the International Mint Directors. Ms. Fore received the Alexander Hamilton Award in 2005, the Department of Treasury’s highest honor. Immediately prior to her appointment with UNICEF, she was Chairman of the Board and Chief Executive Officer of Holsman International, a manufacturing and investment company. Ms. Fore also served on the Corporate Boards of Essilor International SA (EN Paris: EI), Exxon Mobil Corporation (NYSE: XOM), General Mills (NYSE: GIS), Theravance Biopharma Inc. (NASDAQ: TBPH), The Dexter Corporation (NYSE) and HSB Group (NYSE). Ms. Fore served as Chair of the Middle East Investment Initiative, Global Co-Chair of Asia Society and Co-Chair of WomenCorporateDirectors. She was a Trustee of the Aspen Institute and the Center for Strategic and International Studies and served on the Boards of the Chief Executives for Corporate Purpose, Center for Global Development, and Initiative for Global Development. She is a member of the American Academy of Diplomacy, American Leadership for a WaterSecure World Campaign Cabinet, Chief Executives Organization, Committee of 200, Council on Foreign Relations, Economic Club of New York, International Women’s Forum, Wellesley College Business Leadership Council, WomenCorporateDirectors, and Young Presidents’ Organization / World Presidents’ Organization. Ms. Fore has a Bachelor of Arts in History from Wellesley College and a Master of Science in Public Administration from the University of Northern Colorado. In 2014, she received the Circle of Achievement Award and in 2006, the Alumnae Award from the Baldwin School. In 2013, she received CRDF Global’s George Brown Award for International Scientific Cooperation. In 2004, she received the Alumnae Award from the University of Northern Colorado. She has also studied International Politics at Oxford University and Corporate Boards at Stanford University Graduate School of Business. Ms. Fore is married. She is a sailor, and collector of antique Holsman Automobiles, as well as a lemon and avocado rancher in Santa Barbara, CA.