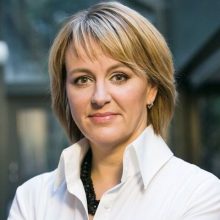 Chair of the Executive Board, Women Political Leaders Global Forum

Hanna Birna Kristjánsdóttir is the Chair of the Executive Board of the Women Political Leaders Global Forum (WPL). She has been active in Icelandic politics for many years, both in the national Parliament and local government. She is the former Chair of the Foreign Affairs Committee in the Parliament and former Minister of the Interior in Iceland. Before getting elected to Parliament, she was the Mayor of Reykjavík, the President of the City Council and chaired several committees and organisations for the City of Reykjavík. She is also the former Vice Chair of the Independence Party in Iceland; the former deputy Secretary General of the party and the former Secretary General of its Parliamentary Group. She obtained a Bachelor of Arts in Political Science from the University of Iceland in 1991. After that, she received a Master of Science in International and European Politics from the University of Edinburgh (1993).