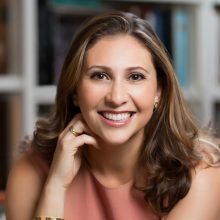 Hagar Hajjar Chemali is a news personality, political satirist, and creator, host, and writer of Oh My World on YouTube. She is a foreign policy expert and is featured regularly as a national security analyst on MSNBC, CNN, BBC, Bloomberg, and Cheddar.

Hagar is also CEO of Greenwich Media Strategies, which provides strategic communications consulting in the areas of national security, counter-illicit finance, and business, she is an adjunct professor at Columbia University’s School of International and Public Affairs, and she is a senior nonresident fellow with the Atlantic Council’s GeoEconomics Center.

Her professional background and foreign policy expertise have been shaped by senior public affairs and policy-making positions she held over the course of 12 years in the U.S. Government.

From 2015-2016, she was Director of Communications and Spokesperson for the U.S. Mission to the United Nations under President Obama, and from 2014-2015, she was Spokesperson for Terrorism and Financial Intelligence at the U.S. Department of the Treasury. From 2010-2012, Hagar was Director for Syria and Lebanon at the White House, National Security Council, where she advised on and coordinated the implementation of U.S. policy toward Syria and Lebanon. Hagar also worked at the Treasury Department as a Senior Policy Advisor on Asia and Middle East Policy Advisor in the Office of Terrorist Financing and Financial Crimes.