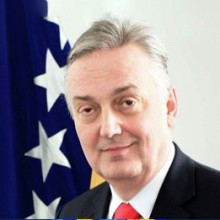 His professional career began in 1989 as Professor of Economics and Electrical Engineering at the University of Sarajevo. At the Faculty of Economics in 1994, he became head of the Department of Business Information, a year later, and director of the Center for Management and Information Technology.

Since 1998 member of the “Global Leaders for Tomorrow” by the World Economic Forum in Davos. Since 2004 he is member of the International Advisory Committee of the Congress of Democrats from the Islamic countries, and since 2005 he has been the Vice President of the Senate of the Bosnian Institute. Member of the World Academy of Arts and became in 2006 a member of the Club of Madrid (Association of Former Heads of State and Government) since 2005.

Lagumdzija served as the President of the Social Democratic Party (SDP) from 1997 until 2014. He has been a member of the party since 1992 and remains one today.

In the period from 1992 to 1993 Lagumdzija served as Deputy Prime Minister of the Republic of Bosnia and Herzegovina (BiH), and in 1993 he was the Prime Minister.

Lagumdzija has been a member of the House of Representatives of the Parliamentary Assembly of Bosnia and Herzegovina from 1996-present, with the only interruption in the mandate – from 2001 to 2002, when he was the Minister of Foreign Affairs and Chairman of the Council of Ministers.

He is married to his wife Amina they have two daughters Dina and Asja Zara and one son Zlatko Salko.