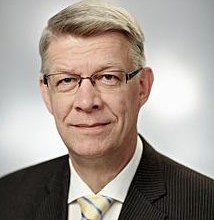 Mr. Valdis Zatlers is elected President of Latvia 2007-2011. From year 2011 until 4th of November, 2014 was a member of the Parliament of Latvia (Saeima), Chairman of the National Security Committee. Graduating from Riga Institute of Medicine as a physician in 1979, he received professional orthopedic training at Yale and Syracuse universities in 1991. He first worked as a traumatologist–orthopedist (1979-1985), later becoming Head of the Traumatology Department (1985-94) at Riga Hospital No. 2. From 1994-2007, he served as the Director and later chaired the board of the State Hospital of Traumatology and Orthopaedics. In 1993, Mr. Zalters received the prize from the International Arthroscopy Association for the largest contribution to the development of arthroscopy in emerging countries. From 1995-1999, he was the Latvian coordinator for a Swiss assistance project. As a medical service officer, Mr. Zatlers worked at Chernobyl following the nuclear reactor accident in 1986. He was a member of the First Council of the Popular Front of Latvia at the time of restoration of independence of Latvia. In Latvia he has been awarded the Commander of the Order of Three Stars; the Order of Viesturs, First Class; and the Cross of Recognition, First Class.