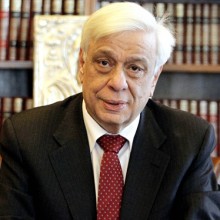 President of the Hellenic Republic

Born in Kalamata, Peloponnese in 1950, Prokopis Pavlopoulos graduated from high school in his native city and moved to Athens as a student at the Law School of the University of Athens in 1968.

He is married to Vlassia Pavlopoulou-Peltsemi and they have three children: Vassilis, who is an attorney-at-law, Maria, a French language and literature graduate and Zoe, a nursery teacher.

In 1974 was Secretary to the first President of the 3rd Hellenic Republic, Michail Stasinopoulos; the two men had developed a close relationship during the junta in Greece (1967-1974) when Mr Stasinopoulos was under house arrest.

He studied law at Université de Paris II on a scholarship by the French Government, and was awarded his postgraduate studies Diplôme d’études approfondies (DEA) in 1975 and his doctorate in Public Law in 1977 with honourable mention.

He then entered the academia as a lecturer (1981), assistant professor (1983), associate professor (1986) and professor of Public Lαw (1989) at the Athens University Law School.

In 1986 he was elected Visiting Professor at Université de Paris II.

He has published extensively books, papers and articles which have received peer recognition and acclaim.