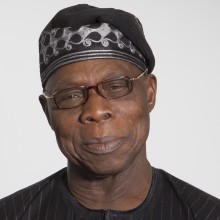 Olusegun Obasanjo was president of Nigeria, Africa’s most populous nation, from 1999 to 2007. He oversaw his country’s first democratic handover of power and administrative reforms that accelerated economic growth.

Mr Obasanjo has played a pivotal role in the regeneration and repositioning of the African Union, including helping to establish the New Partnership for Africa’s Development (NEPAD) and the African Peer Review Mechanism (APRM), designed to promote democracy and good governance. He has consistently supported the deepening and widening of regional cooperation through the Economic Community of West African States (ECOWAS) and the Co-prosperity Alliance Zone incorporating Benin, Ghana, Nigeria and Togo. He has served as chairman of the Group of 77, chairman of the Commonwealth Heads of Government Meeting, and chairman of the NEPAD Heads of State and Government Implementation Committee.

Mr Obasanjo has also been involved in international mediation efforts in Angola, Burundi, Namibia, Mozambique and South Africa. In 2008, the United Nations Secretary-General, Ban Ki-moon, appointed Mr Obasanjo as his Special Envoy to the Great Lakes region, where he has played an integral part in mediation efforts in eastern Democratic Republic of the Congo.

Mr Obasanjo was born on March 5, 1937, in Abeokuta, Ogun State, South Western Nigeria. He attended Baptist Boys High School, Abeokuta, then worked as a teacher before enlisting in the Nigerian Army in 1958.