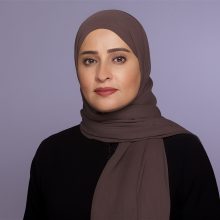 Minister of State for Government Development and the Future, Federal Government of the United Arab Emirates

Her Excellency Ohood Khalfan Al Roumi is the Minister of State for Government Development and the Future in the United Arab Emirates. This ministerial portfolio was created in the UAE government for the purpose of advancing government development and for the preparation for the future planning of the government of the United Arab Emirates. Her Excellency Ohood is also the Chairwoman of the Federal Authority for Government Human Recourses (FAHR), the federal entity responsible for the growth and development of UAE federal government human resources. Her Excellency is Vice Chair of World Government Summit Organization. She is also member of the Emirates Competitiveness Council, a board member of the ‘Frontline Heroes Office’, and member of the board of trustees of the Museum of the Future. Her Excellency also oversees the Prime Minister’s Office of UAE and multiple strategic programs and initiatives that comes beneath it, such as the development of the UAE Centennial 2071, the coordination and follow up on executing UAE Vision 2021. He excellency also overlooks UAE government strategy and innovation, government development programs as well as Sheikh Khalifa Government Excellence Program, Government Performance Management System “Ada’a”, Mohammed Bin Rashid Centre For Government Innovation and the UAE Government Leaders Program. In 2016, H.E. Al Roumi held the position of Minister of State for Happiness and Wellbeing, the first ministerial position of its kind in the world introduced by the UAE government. The United Nations Foundation appointed H.E. Al Roumi as member of the UN’s Global Entrepreneurship Council (GEC) in 2015, making her the first Arab member to hold that position. She also made the Young Global Leaders (YGL) list with World Economic Forum (WEF) in 2012. H.E. was also listed among the World’s Greatest Leaders in 2017 by Fortune magazine in recognition of her accomplishments, making her the only Arab figure in the list. Prior to her role at the Ministry of Cabinet Affairs, H.E. Al Roumi held several leadership positions within the UAE federal government and the Government of Dubai. She was the Director of Economic Policy at the Executive Office of His Highness Sheikh Mohammed bin Rashid Al Maktoum, Vice President Prime Minister of UAE Ruler of Dubai, where she led several teams to develop multiple government-driven strategies, such as the Economic Sector Task Force for the Dubai Government’s as well as the Federal Government strategy. She also was Director of Business Research at the Dubai Chamber of Commerce and Industry. H.E. Al Roumi holds an Executive Master’s Degree in Business Administration (EMBA) from the University of Sharjah and a Bachelor’s in Economics from the College of Business and Economics, United Arab Emirates University. She is also a graduate from Mohammed Bin Rashid Program for Leadership Development.