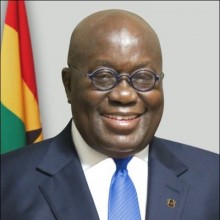 Born on March 29, 1944, in Swalaba, Accra, Nana Addo Dankwa Akufo-Addo was raised in Accra, Ghana’s capital. His father’s residence in Accra was effectively the headquarters of the country’s first political party, the United Gold Coast Convention (UGCC), after its formation in 1947. Three of the Big Six (the founding fathers of Ghana) were Akufo-Addo’s blood relatives: J.B. Danquah (grand uncle), William Ofori Atta (uncle) and his father, Edward Akufo-Addo, who became the third Chief Justice and later ceremonial President of the Republic from 1970-72.

Akufo-Addo received his primary education at the Government Boys School and Rowe Road School, both in Accra Central. He went to England to study for his O-Level and A-Level examinations. He returned to Ghana in 1962 to teach at the Accra Academy before going to the University of Ghana in 1964 to study Economics. After graduating, he went on to study law in the UK and was called to the English Bar (Middle Temple) in 1971 and the Ghana Bar in 1975.

He is married to Rebecca, daughter of Justice J.H. Griffiths-Randolph, Speaker of the Parliament of the Third Republic of Ghana. They have five children and five grandchildren.

In October 1998, Akufo-Addo competed for the presidential candidacy of the New Patriotic Party (NPP) and lost to John Kufuor, who won the December 2000 presidential election. He later became the first Attorney General and Minister for Justice of the Kufuor era. Akufo-Addo resigned from the Kufuor government in July 2007 to contest for his party’s presidential nomination in the 2008 elections. In the runoff, Mills beat Akufo-Addo by the smallest margin in Ghanaian political history. Akufo-Addo accepted the results without calling for a recount, thereby helping to preserve the peace, freedom, and stability of Ghana. Subsequently, Akufo-Addo contested the 2012 national elections against the NDC candidate John Mahama and lost. That election generated considerable controversy and was finally decided by the Supreme Court in a narrow 5/4 decision in favor of John Mahama. Akufo-Addo is credited with helping to preserve the peace of the country by the statesmanlike manner in which he accepted the adverse verdict of the Court, at a time of high tension in the country.

Akufo-Addo served as Chair of the Commonwealth Observer Mission for the South African elections in 2014. In March of the same year, Akufo-Addo announced his decision to seek his party’s nomination for the third time ahead of the 2016 election. He was elected President of Ghana in the December 7 elections, after obtaining 53.85% of the total valid votes cast, as announced by the Electoral Commission.