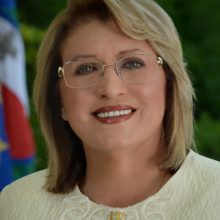 Marie-Louise Coleiro Preca is the ninth President of the Republic of Malta.

Her nomination as President was, for the first time in the history of the Maltese National Parliament, approved unanimously by a parliamentary resolution of the House of Representatives taken on 1st April 2014, marking a development in the constitutional history of Malta.  She took the oath of President of Malta on 4th April 2014.

At the age of 55 years, Coleiro Preca is the youngest President of the country, and is the second woman occupying the office of Head of State after 32 years.Marie-Louise Coleiro Preca dedicated her life to the social well being of the most vulnerable in society, and was influential for effective changes in the social policies of Malta. On 13 March 2013, Marie-Louise Coleiro Preca was appointed Minister for the Family and Social Solidarity. During her term as Minister, she initiated a variety of reforms. These key reforms initiated, during her term of office, included those in the area of social housing, as well as the foundation for an integrated social policy based on a community level approach, with the aim of establishing Family Resource Centers, and a number of Social Development Regional Centers. Another reform brought about the simplification of the social benefits system, which included benefits for retirement age, persons eligible for the marriage grant, persons who are eligible for the widow pensions and those eligible for the children’s allowance. This reform was centered around the need to eliminate applications, and the subsequent bureaucratic processes to make the system more efficient. Coleiro Preca initiated the introduction of a single-means testing mechanism, as well as a complete overhaul in the area of welfare and a more effective anti-fraud social benefits system.  She set up a Welfare Reform Task Force to update the Welfare system and curb abuse and fraud.

During her term as Minister, Coleiro Preca also started the development of a strategy for the sustainability and adequacy of pensions.  She started addressing the anomalies in the pension computation for former shipyard workers and introduced a number of measures, such as the provision of full pension to widows in work, and the provision of a child supplement to address child poverty, motivated by their school attendance, health check-ups and involvement in culture or sports. As Minister, Coleiro Preca tabled several laws before Parliament, including the Act on the Protection of Children, as part of a Children’s Comprehensive Legislation, and which was developed by using an innovative bottom-up approach methodology.  She established the Sexual Assault Response Team, a holistic approach.

In December 2013, together with the European Commissioner for Employment, Social Affairs and Inclusion László Andor, Coleiro Preca launched the LEAP project. This project, which is funded by the European Social Fund, established the Family Resources Centres to provide services at the heart of communities, with the aim of implementing the new Social Investment Package launched by the European Union. In January 2014, Coleiro Preca developed and launched, together with the Prime Minister of Malta, Dr Joseph Muscat, the Green Paper: Structure for Poverty Reduction and Social Inclusion. This Green Paper, aimed at targeting over 22,000 children to take them out poverty and social exclusion, as part of the whole strategy on poverty reduction.

Marie-Louise Coleiro Preca was active in politics for forty years, starting at the young age of sixteen.  She served in Parliament for sixteen years. Within the Labour Party, she served as a member of the National Executive, Assistant General Secretary and General Secretary, occupying the latter post between 1982 and 1991. Coleiro Preca is the first-ever, and only woman who, to date, occupied this important elected position at the highest echelon of a Maltese political party. Coleiro Preca was also President of the Socialist Women’s Group, member of the National Bureau of Socialist Youths (now the Labour Youth Forum), founder member of Ġuze Ellul Mercer Foundation, as well as editor of the newspaper, il-Ħelsien.

Marie-Louise Coleiro Preca graduated as Bachelor in Legal and Humanities and as Notary Public at the University of Malta.